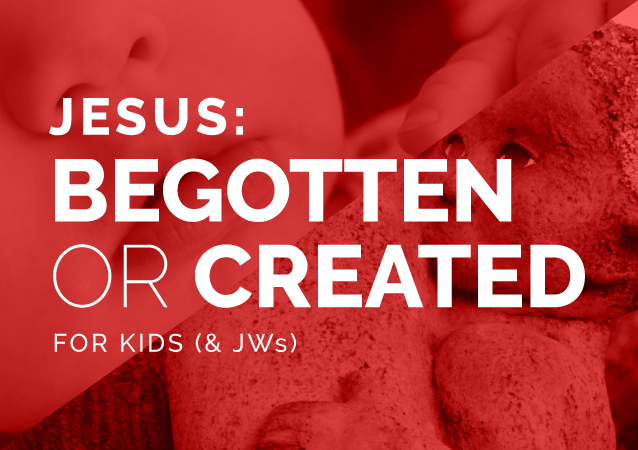 This week, my Jehovah’s Witness friends are stopping by for a visit. It will be the first time my boys can understand the conversation, so I’ve started thinking of terms that should be clarified with them before the meeting (just in case). “Begotten” and “created” come to mind.

When these Witnesses and I met to study “What Does the Bible Really Teach?” together, we had some very tough conversations, and though the meetings ended after a year and a few difficult questions, we were able to end on friendly terms and they still stop by from time to time.

One topic of conversation that we come back to time and time again was the matter of whether Jesus is God or a created being. Was he begotten or created?  The Bible tells us:

For God so loved the world, that He gave His only begotten Son, that whoever believes in Him shall not perish, but have eternal life.

that God has fulfilled this promise to our children in that He raised up Jesus, as it is also written in the second Psalm, ‘You are My Son; today i have begotten You.’

The word we see is “begotten.” Helping our children avoid the confusion that binds Watchtower adherents is important to me. If Jesus is anything less than fully God, we are all in a lot of trouble. So what is the difference between begotten and created?

Human men beget baby humans, swallows beget baby swallows in eggs, and cats beget kittens. One thing begets a thing that is the same kind of thing as itself. They are equal things. Though a baby is smaller than a man, it is no less human than the man. Same with cats and swallows and all other living things.

Now what of creating?

A swallow creates a nest of mud. Has the swallow made something that is the same kind of thing as itself? Nope! A cat makes something in the litter box -I don’t need to be more descriptive than that, do I?- and it is definitely not another cat! Would you ever say that a nest or litter box leaving is equal to the creature that made it? How about a man? What does he make? In The Joyful Christian, C.S. Lewis writes:

“A man makes […] a statue. If he is a clever enough carver, he may make a statue which is very like a man indeed. But, of course, it is not a real man; it only looks like one. It cannot breathe or think. It is not alive.”(p.39)

Lewis then continues to clarify the differences between begetting and creating:

It is easy to see how the misunderstanding can come about when we don’t understand the difference between begetting and creating. If we assume they are the same thing, or use the words interchangeably, we miss the important difference that a begotten thing is the same kind of thing as the thing that begot it, and a created thing is a different thing than the thing that created it. However, we can also deduce, even without the understanding of the two words we are discussing, that God did not “create” another God or god, nor could he have “begotten” one in the exact sense that man “begets” man. Consider these verses (emphasis mine):

“You are my witnesses,” declares the Lord,
“and my servant whom I have chosen,
that you may know and believe me
and understand that I am he.
Before me no god was formed,
nor shall there be any after me.

Jesus said to them, “Truly, truly, I say to you, before Abraham was, I am.” So they picked up stones to throw at him, but Jesus hid himself and went out of the temple.

When I [John] saw him, I fell at his feet as though dead. But he laid his right hand on me, saying, “Fear not, I am the first and the last, and the living one. I died, and behold I am alive forevermore, and I have the keys of Death and Hades.

Jesus said “I AM” and the Jews prepared to stone him for blasphemy. He calls himself “the first and the last.” If there are no other Gods before or after God, and God will not give his glory to another, and Jesus claims to be God and God is still pleased with him, we can reasonably believe that Jesus must be the same God.  If Jesus were a created God (or a God begotten in the way that men beget), then all of the verses above are contradictory and confusing and suggest that God doesn’t know what he is talking about. Or he is a liar. That is not the God we worship or that JWs worship. So, perhaps our understanding of the way “begotten” is used in the Bible needs to be refined a bit further. Let’s take a look at what the actual greek word we are translating as “begotten” – monogenes – means:

According to the Greek-English Lexicon of the New Testament and Other Early Christian Literature (BAGD, 3rd Edition), monogenes has two primary definitions. The first definition is “pertaining to being the only one of its kind within a specific relationship.” This is its meaning in Hebrews 11:17when the writer refers to Isaac as Abraham’s “only begotten son” (KJV). Abraham had more than one son, but Isaac was the only son he had by Sarah and the only son of the covenant. Therefore, it is the uniqueness of Isaac among the other sons that allows for the use of monogenes in that context.

The second definition is “pertaining to being the only one of its kind or class, unique in kind.” This is the meaning that is implied in John 3:16 (see also John 1:14, 18; 3:18; 1 John 4:9). John was primarily concerned with demonstrating that Jesus is the Son of God (John 20:31), and he uses monogenes to highlight Jesus as uniquely God’s Son—sharing the same divine nature as God—as opposed to believers who are God’s sons and daughters by adoption (Ephesians 1:5). Jesus is God’s “one and only” Son.

I plan to be more precise when we discuss procreation with our children (even that adds confusion to the mix, doesn’t it? Shouldn’t it be pro-begetting?!). Instead of saying parents make babies, they beget. This distinction will lay groundwork for helping our children understand that nature of Jesus. Though Jesus could not have been “begotten” in the exact way that a man begets a man, we see that the New Testament writers wanted to convey something very important about who Jesus is, namely that he is the same kind of uncreated thing as God… and unique.

This post was edited for clarity on August 4, 2015. Thank you for your input!